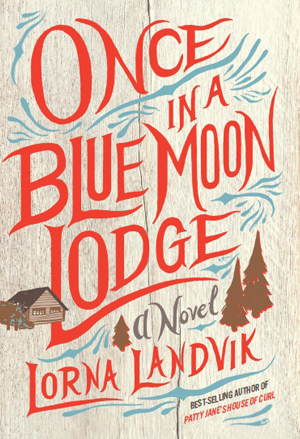 Once in a Blue Moon Lodge

Set adrift when her mother sells the salon that has been a neighborhood institution for decades, Nora Rolvaag takes a camping trip, intending to do nothing more than roast marshmallows over an open fire and under a starry sky. Two chance encounters, however, will have enormous consequences, and her getaway turns out to be more of a retreat from her daily life than she ever imagined. But Nora is the do-or-die-trying daughter of Patty Jane, who now must embrace the House of Curl’s slogan: “Expect the Unexpected.”

With her trademark wit and warmth, Lorna Landvik follows Nora and an ever-growing cast of characters between city and wooded retreat, Minnesota and Norway, a past that’s secret and a future that’s promising, but uncertain. Responding to a mysterious letter with a Norwegian postmark, Nora’s grandmother Ione travels to her native land to tend to a dying cousin and her husband—two people who played a painful, pivotal role in her past. Nora accompanies her and is surprised by her grandmother’s long-ago love story—but even more surprised by the beginning of her own.

A book about making new beginnings out of old endings, Once in a Blue Moon Lodge invites readers to check in, set down their baggage, and spend time with the kind of people who understand that while they can’t control all that life throws at them, they can at least control how they catch it. And as anyone who has stopped in at Patty Jane’s House of Curl will tell you: you’re in for a rollicking good time with characters whose strengths, foibles, and choices will have you laughing and crying. Hankerings for coffee and gingerbread cookies may also be experienced.